We have with us Luke Melia who calls himself an author by passion. He loves representing him through a cartoon character for his readers. I am lucky to read a few of his books and found him to be an extraordinary writer who can write in various genres and with perfection. I had a close chit chat session with this amazing author where he shared a lot about him and his journey. Check It out………… 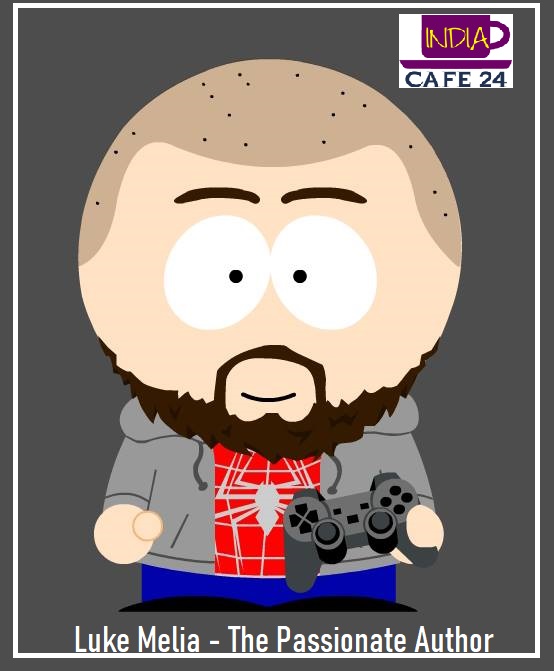 1)    Welcome, Luke Melia. It’s a pleasure to have you on this platform of Indiacafe24.com. Our readers would surely want to have a sneak peek about you and wish to know about you apart from a writer. Kindly share a brief about you, your education and your family.

Thanks for having me! I grew up in the midlands of England, but last year I moved up to Scotland with my girlfriend where we live with our cat Simba. I’ve had a few different jobs over the years, including people management, project management and business analysis. However, writing has always been my biggest passion, and last year I decided to take a career break to focus on it for a few months.

2)    Which authors and their work inspired you the most?

Garth Ennis, easily! I grew up reading his Punisher Knights (and later, Punisher Max) and Preacher series.
His Punisher Max series, in particular, was a particularly inspiring one. If you’re not familiar with The Punisher, it’s about a highly trained military man named Frank Castle whose family is killed in the crossfire of gang conflict. Frank then goes after those responsible… but in Ennis’ Max series, Castle is now an old man. The people responsible were killed years ago. He still ventures out to slaughter criminals, but there’s no motivation anymore. There’s no story arc, no friends or family. He’s a machine, just doing what he does. How do you write stories about that? How do you craft a tale about a character with no goal, with nothing to learn, nothing to become? And yet, Garth Ennis managed to do it over and over again. Each book was a pleasure to read, and I learned a lot from them.

3)    Can you recall that moment when you first realized that there is an author within you? Or it was someone else you discovered the author in you?

For as long as I can remember I’ve wanted to write. I remember wanting to write movies, then TV shows, then animations… but it was when I put my hand to comics that it finally clicked.

4)    There are so many books so far you have published- Tell us which among them is your favorite and why?

This is a tough one… I could probably give you a list of reasons for any of them as to why they are my favorite.
But I’ll try and give you a better answer than that…
There’s two that immediately spring to mind.
For the process of creating it, I’d say Oculus. Every day for almost two years, Vinny Smith, David Anderson (two of the most talented people I know) and I worked on that graphic novel. It was a first for all of us, and I don’t think any of us knew going in just how much work it was going to be. We dedicated our lives to get that done, and the result is something I think we’re all proud of.
My second choice is my novel Give up the White Room. There are a few reasons for this. It was significantly more personal than anything else I’d written, and it gave me the opportunity to say a lot of the things that I’ve wanted to say with my work. It was also my first attempt at writing a prose novel, something that I never expected to be able to do. It was, by far, the hardest I have ever worked on anything. 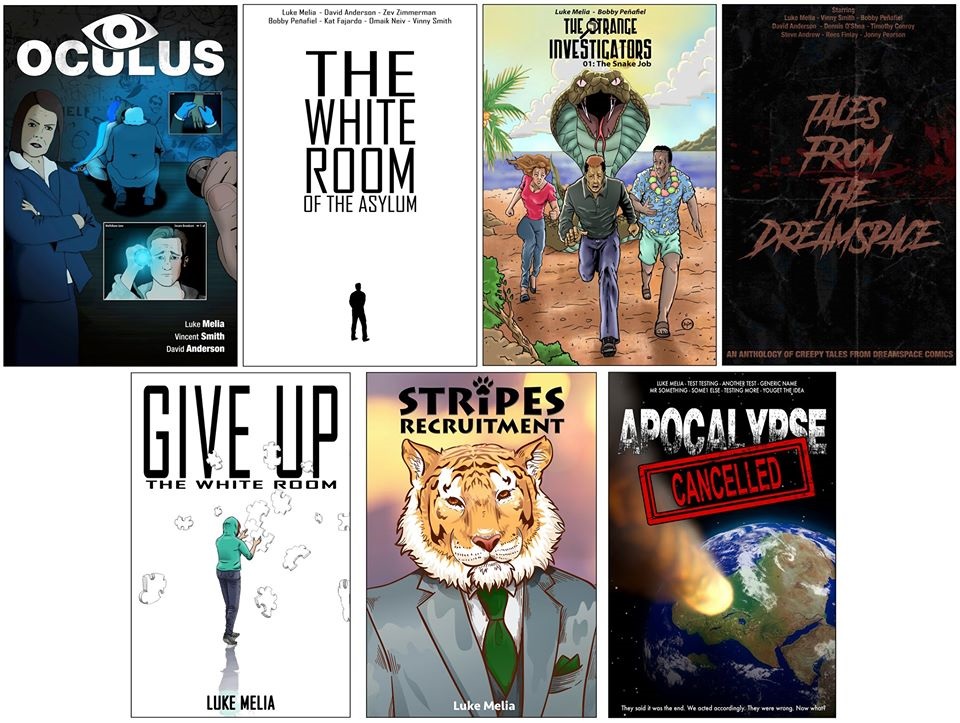 5)  The conflict between the publishers and authors is very common. Have you faced such a problem while finding a publisher for your books and that what encouraged to be with Ebook publishing?

I was lucky enough to get a publishing deal for my first book, Oculus.
Whilst having a publisher on board helped give the book a push, I struggled with some of the more restrictive aspects of having another company controlling my work. And so, for our second book The White Room of the Asylum, I researched ways to distribute it myself- both physically in print and digitally as an Ebook. Since then, all my books have been self-published under our own name, Dreamspace. Self-publishing is a good way to do it if you want to control it yourself, but a challenging one in terms of finding an audience.

6) Share something with us about the recognitions you received so far for your work?

I’ve had a number of great reviews for most of my books.
In 2017, The White Room of the Asylum won ‘Best Mystery Comic’ at Comixcentral. A number of my books were also selected for ‘Book of the Week’ on that same site, including Tales from the Dreamspace and Stripes Recruitment.

7) The cover pages of each one of your book is very interesting and designed so well. How you conceptualize the design and who designs it?

Coming up with a cover that captures the story and is visually interesting is always tough. Usually I’ll come up with a concept, create an ‘ugly’ prototype, then it run is past my much more visually-skilled friends (David Anderson and Vinny Smith, as mentioned earlier) who will give me pointers on how to improve it.

There are some, however, that have been fully illustrated. David did a fantastic job on creating the cover for Oculus. A talented illustrator, Bobby Peñafiel, created the one for The Strange Investigators, and it was Vinny who did the artwork for Give up the White Room.

8) What about poetry- It attracts you or not? If yes, plz share a few lines of your poetry work.

Poetry isn’t something I’ve delved into much- but I wouldn’t rule it out as something to experiment with in the future.

9) What are your other passions in life?

I have a few, but my main ones are probably video games, movies, and music. Music, in particular, is a great source of inspiration for me. I also collect statues/figures from all sorts of nerdy comics, movies, games etc.

10) What are your future plans?

I have a couple of book projects just finishing up, and then my plan is to take a break from writing books for a while and try a few other creative endeavors, as well as work on trying to push some of my existing books out there a little more.

11) Can we expect in coming future a paperback collection of all your books as a combo or separately?

I’ve actually just released a new paperback collection of two of my books. It’s called The White Room Double Pack, and it includes both my graphic novel The White Room of the Asylum, and my novel Give up the White Room. It’s available on Amazon now.

12)  What next in pipeline and of what genre?

I’ve got two projects in the works- both of which should be finished and released within the next few weeks.

The first is a big collaborative project called Apocalypse Cancelled. It’s a collection of short stories and comics from various authors, all based around a central premise: The world gets told, with certainty, that an asteroid will hit the Earth in three weeks’ time. When it misses, humanity has to face up to all the craziness that went on during that time. All going well, it should be out around Feb/March time.

The other one is a novella that I’ve kept fairly quiet. I won’t say too much about that one yet, but hopefully, it’ll be out in paperback early February.

13) Share some tips for young authors who wish to make a mark in the industry with their work?

That one I’m still trying to work out myself…

What I would say for anyone who is wanting to write, try and get into the habit of writing every day. Writing while you’re inspired is easy, but to get something finished you need to learn to write on the days when you really don’t want to. If you get used to doing a little each day then it’ll become habitual which will really help.

Also, in my experience as soon as I put pen to paper it feels like my idea is ruined. Whenever I read something back, it seems so simple and childlike compared to how it sounded in my head. At some point, usually right towards the end of the project, it does start to come together again and look like my original vision. Getting there is tough but well worth it. If you’re feeling discouraged, my advice is just to keep going, and it will get there.

Lastly, and this won’t be for everyone, but I find music is a massive help. Whenever I start working on something new, I make a playlist. They’re always comprised of music that wouldn’t appear in my normal rotation – that’s important. They’re made up of songs that ‘feel’ the way that I want the writing to feel. Then, every time I work on the project, I put that particular playlist on. It’s amazing how much it helps. After a while, if I’m having a day of feeling uninspired, I can just put the playlist on, and it gets me right back into that mindset.

14) Define Luke Melia the Author in One line?

Previous: A Book Review Of Stripes Recruitment by Luke Melia
Next: Getting Familiar With Different Types Of Powerful And Sacred Rudraksha Bead