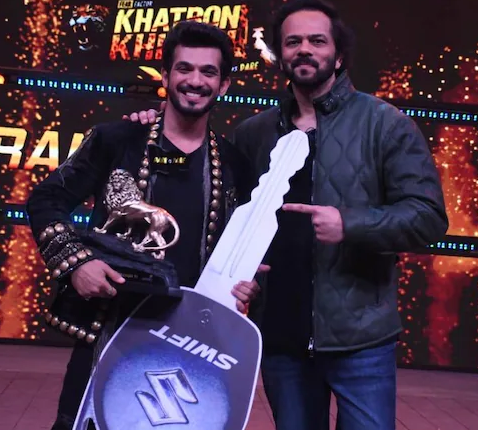 The final event of KKK11 was shot in Mumbai, whereas the other episodes of the show including the final happened in Cape Town, South Africa. The last challenge involved stunts related to a chopper, a boat, and water. Vishal, owing to his aquaphobia, gave up in the middle of the challenge. Divyanka and Arjun competed bravely, where Divyanka lost to Arjun by only 20 seconds.

Arjun Bijlani is a well-known actor in the television industry. He has worked in many popular Hindi serials such as Left Right Left, Miley Jab Hum Tum, Naagin 1, 2, 3, etc. He has also hosted the reality shows Kitchen Champion 5 and Dance Deewane 2. Well, Divyanka, we can say she is a true Dhakkar girl and absolute bravery displayed by her during the entire season. We can say it’s mere luck that she lost to Arjun or, else both the finalist was at par.

Fear Factor: Khatron Ke Khiladi is a reality show where the participants have to perform tough challenges, testing their bravery, and overcoming their fears. The show got inspired by the American Fear Factor. The first season of KKK was hosted by Akshay Kumar in 2008, in South Africa. Rohit Shetty has been its host from the eighth till the latest season. According to sources on the Net, Khatron Ke Khiladi 12 will take place in India, and its auditions will soon commence.

Previous: A Book Review Of Lights Camera War! : Fifty Indian War Movies 1950- 2020 By Rammesh
Next: The Cruel King of Ashudhar by RH Rose- A fantastic blend of thriller elements with fantasy