Indiacafe24.com > Book Reviews > Extract from Chapter-2 The Mantra of Success (The Mantra and the Meaning of Success)

We all are aware of the writing style and uniqueness of Author Rajesh Talwar. He wrote many books and each of them proved to be a quality read for the readers. His next book is The Mantra and the Meaning of Success, which already winning the hearts of many. Today  I am sharing with you an extract of the book. THE IMPORTANCE OF BEING KIND

When Oscar Wilde wrote The Importance of Being Earnest, everyone understood that he was gently toying with his audience, for Ernest was also the name of an important character in the play. No such subtleties exist when I speak very directly on the importance of being kind. In my view, kindness can actually help you in your journey to success, contrary to popular (un)wisdom that only toughness and ruthlessness can help you achieve success. Making your way to the top is one thing, but how you behave with your colleagues, and especially your subordinates, can be equally important. No one likes a person who sucks up to the bosses but becomes arrogant when dealing with those who report to him. 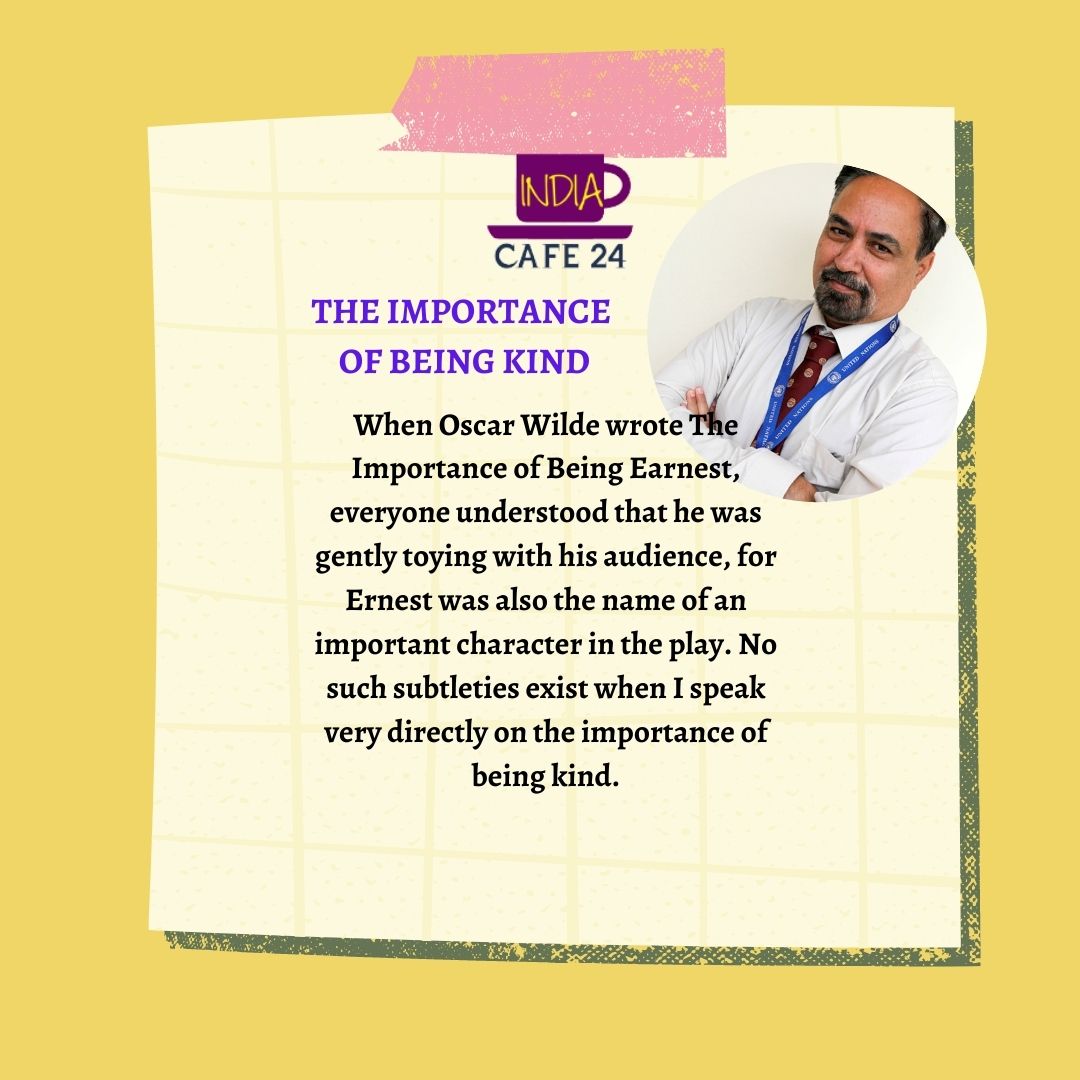 Remember that nothing lasts for ever, and you will not always remain at the top of the pyramid. As the old saying goes, ‘Be nice to people on the way up, because you’ll be meeting them again on the way down.’ There are ups and downs in everyone’s life, and it is safe to assume that that is quite simply the way Life is. Change is the only constant.

I’d like to give an example of the importance of the personal attributes of patience, kindness and courtesy, and how they can affect your career, from my own professional experience. I was posted in Afghanistan as a legal adviser with the United Nations for a couple of years till 2010. In early 2010 I took up a senior position in human rights with the UN in Kosovo, an emerging East European country. From there I went to work in East Timor, or Timor Leste, a tropical island not far from Australia. After my stint in East Timor, I took time off from the UN to attend to some personal matters. This took longer than I had anticipated. Once you have left an organisation and have been unemployed for a while (in my case it was close to two years), it’s never easy to get back into the system. After I had sorted out my personal affairs and was ready to start working again, an interesting assignment with the UN in Afghanistan caught my eye. I decided to apply.

Unknown to me, the Senior Adviser with whom I would be working (to advise the Special Representative of the Secretary General (SRSG) heading the UN Mission in Afghanistan), in the event that I was chosen for the position, was having some trouble with his team members. His subordinates did not have any issues with him personally, but they were fighting with one another. Consequently, he wished to hire someone who was not only professionally competent but additionally was someone with a cooperative attitude and a pleasant demeanour. What he did not want was to inadvertently hire an overambitious troublemaker.

Although the Adviser liked my CV and was satisfied with my performance in the interview, he wished to know more about what kind of a person I was. Was I really a team player? Would I get along with colleagues from other cultures, as sensitivity to other cultures is a core UN value? The colleagues who worked with me prior to 2010 had, much like myself, all since departed for other overseas assignments, so the Director could not casually check with them what kind of a person I was. There were, however, still three people associated with the office whom he could ask.

He decided to ask the Afghan office car driver and the two ladies who cleaned the office. Being local staff, they had continued to work for the office. He took care to tell them that they should give their honest opinion, which would be treated with utmost confidence.

Now, it has been my practice to always be courteous to every UN colleague, be it the SRSG or a photocopying assistant. Every few weeks I would leave a generous tip for the cleaning ladies to supplement their wages. I knew their salaries were low, and they often had large families to take care of. It was the very least I could do for hardworking and diligent staff. I was also friendly with the driver and sometimes brought him things from India, including medicines on a couple of occasions. (Most of the medicines sold in Kabul are imported from Pakistan, and a high percentage of these are fake. To be fair, in India too there are media reports periodically of seizures of fake or adulterated medicine, but Pakistan is far ahead in the game!)

So, these three people – the driver and the two cleaning ladies – became my unexpected additional referees, for my future boss wanted back-up to the official references that I had already submitted.

I received an outstanding report from all three additional references – and was soon on my way to Kabul for the new assignment.

I could never have imagined that the driver and cleaning ladies in my office would have an important role to play in my recruitment for a high-profile assignment with the United Nations, but that’s how it happened. Be kind.

Previous: No Shadow Without Light By Luke Gracias – A Story That Offers An Interesting Blend Of Historical Fiction And Facts
Next: Top 5 Foods That Can Help Fight Aging