Meet Author Shubira Prasad- A dreamer, who is grounded in reality.

As an interviewer, I consider myself lucky to get the opportunity to interact with such amazing authors as Shubira Prasad. Interacting with her remained one of the best experiences for me. The reason is not just because she is an author but also because she is an astrologer, the community I belong to. I interacted with her to know her journey as an author. Well, also honored to know a lot about her view of the Astro world. I am blessed to introduce this amazing author to my readers. I am sure it will be an inspiring one for many. 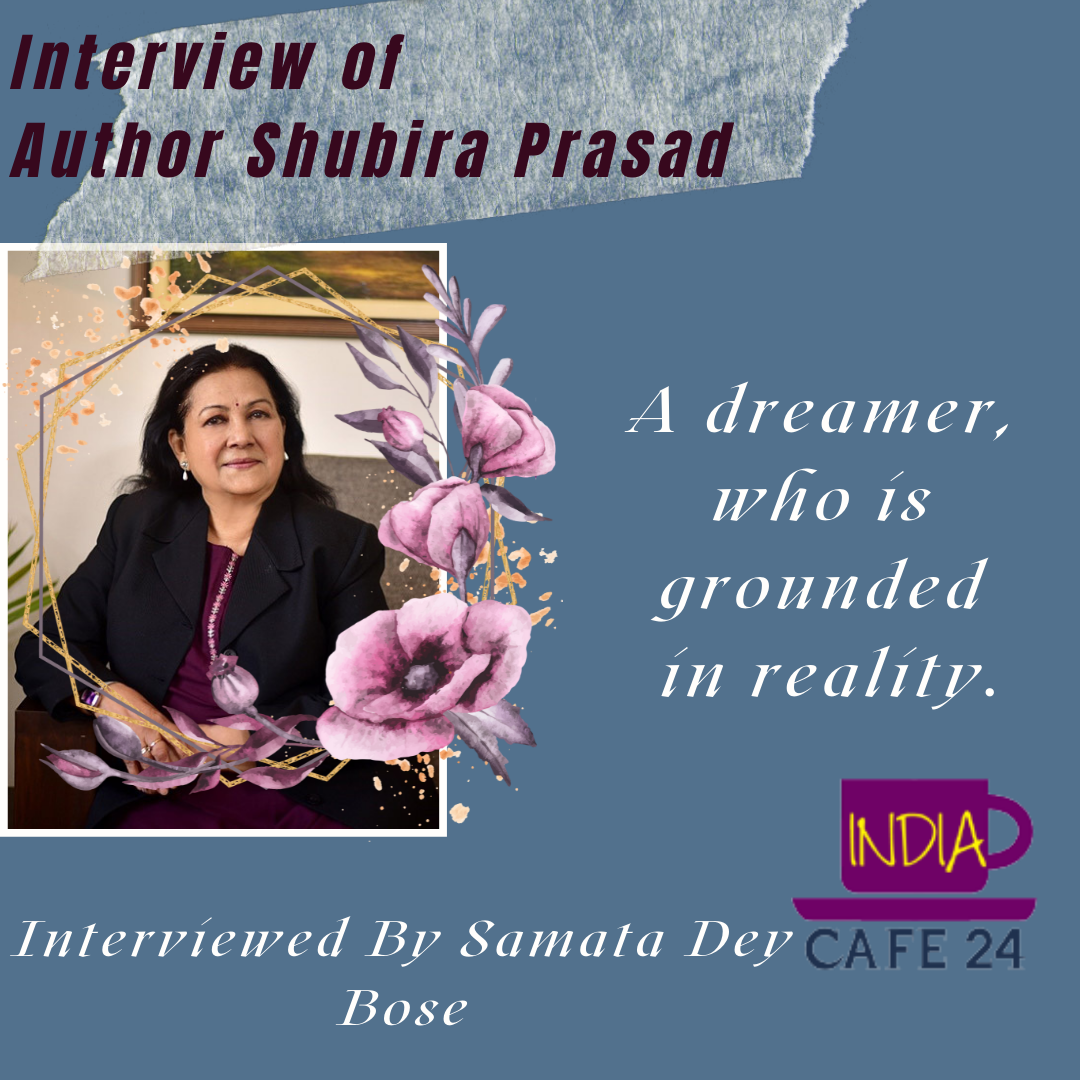 Welcome to this platform of Indiacafe24.com Author Shubira Prasad. Before we begin the session, request you to give a brief about you and your family?

Ans. Thank you so much for inviting me to your esteemed forum. My father was in the Eastern Railways. As such I had travelled quite a lot in Eastern India. I did my graduation in Psychology Honors and my masters in English literature. I got married to an Air Force officer which gave me a chance to travel all over the country. We have two sons.

When did you start writing, and how did that happen?

Ans. I began writing while in school. It was sporadic, not very serious. I wrote whenever I felt like it. Those days I was much more into reading. Both my father and my mother were voracious readers, a trait which I inherited. Later when I began to understand myself, I found that writing gave me so much of freedom and pleasure, that I felt compelled to write.

Checking the blurb of your books, It’s very well understood that you are inclined towards Hindu Epic genre. What’s the reason behind this love for Hindu epic?

Ans. I have read a few epics from other systems of belief too. My reading of the Hindu epics has been maximal. The more I read about the Hindu epics the more fascinated I became with them. Not only these epics set an example to the humankind, but they also give you the freedom to let your imagination soar.

Mam you remained a teacher of literature. I would love to know what according to you is easier … Teaching or Writing.

Ans. I would say that teaching for me was easier than writing. In teaching one teaches what one already knows. One just has to gauge the intelligence and aptitude of the student and teach him or her accordingly. Writing remains a mystery till the time you put it on paper. Even then many times one is unable to produce his thoughts into words, or the words are not what one wanted to convey. Sometimes a wisp of a thought comes and goes, and one is left grappling in the air. Research is a great part of writing a book. One must know where to search to give credence to his or her thoughts. Writing is unexplored territory, hence it requires more effort and thought than say teaching.

You graduated with Psychology Honors and later completed your Post Graduation in English literature. From the psychologist point of view how different is the mind setup of the students of your time and the current generation.

Ans. There was not such a barrage of information and the plethora of social media that we have now. Reading books and going to the cinema were the predominant modes of entertainment. Children and young men and women tend to follow whatever they see or read. Hence there is a sea change in the attitude of students of the earlier and the present generations. The parents too have more money power now. Malls have opened up everywhere, hence there is more spending. The present generation is more open, more confident and more raring to go. The down point is that they are more prone to being impolite and discourteous.

Before preparing for this interview, I came across an interesting aspect about you. You have been practicing astrology for about 20 years. I am an astrologer but definitely with not as much experience as yours. What’s your view on astrology…. Specifically Vedic astrology?

Ans. It’s wonderful to know that you are an astrologer too. We must meet sometime and have a shastrartha. Even though I have been practicing astrology for a long time, I am still of the opinion that astrology should be taken as a guideline. We should guide a person and suggest that he should utilize his better times to the maximum. Even during the bad times, an individual should not lose courage, rather he or she should work harder during this time and introspect and meditate and be prepared for the good times which are bound to come. Having said that I do believe in the power of rituals and mantras. A person cannot change his destiny, he will have to pay for his past karmas in this or in any other birth. But a person can atone for his past karmas and smoothen his life to a large extent. This can be done by meditation, prayers, good thoughts, and deeds. There are many other solutions which cannot be discussed here in details.

Psychology and Astrology in my view is a perfect combo which helps to read a mind or a horoscope better. How far am I correct mam?

Ans. You are absolutely correct. Astrology and Psychology are indeed the perfect combination for being a good astrologer. There should be a burning desire to know how an individual functions and how the stars affect him. One subject compliments the other.

What I learned, being a student of astrology, is that as astrologers we can predict but cannot give a verdict. We can help people to manage life better. Do you agree?

Ans. As I have said earlier, astrology at the most should be taken only as a guideline, an astrologer’s words should not be taken as carved in stone. There are many planets affecting a person’s life, which are yet to come into reckoning, for example Pluto, Uranus, Neptune, and some others too. Not much astrological research has been done on these planets. Only the major planets nearest to the Earth and Rahu and Ketu are considered in reading an individual’s life.

Coming back to your books…..Get to know your interest towards supernatural and the Indian epics… How did that influence you to try your trilogy?

Ans. I am of the opinion that there is no magic and nothing is supernatural. These are just theories that cannot be proved or explained. They are either too ancient that we can only conjecture or too bizarre for any logical explanation. Many of our epics fall in this category. In our heart of hearts, we know that there must be a logical explanation. So great is our faith that we believe in it any way. This unknown is what attracts me to the supernatural. Hence the trilogy.

The Demons of Jaitraya, the first part of the trilogy- How was the response of the book?

Ans. The response was overwhelming. Initially it was my friends and family who were pleasantly surprised that I wrote a mythological fantasy which originated from the time of Ramayan. People appreciated the fact that though it was a mythological fantasy, it was not an interpretation of the Hindu epics, rather it was a story of the demons who had escaped from Ravan’s army, after Ravan lost the war.

What is the minimum time required for writing a book? How much time you took to write the first part of the trilogy.

Ans. It took me almost one year to write the first book of the trilogy ‘The Demons of Jaitraya.’ I am a mid-paced writer. I make sure that I write 500 to 1000 words a day. I cannot write more, as my thoughts get jumbled up, my characters take over and I go on a different tangent. 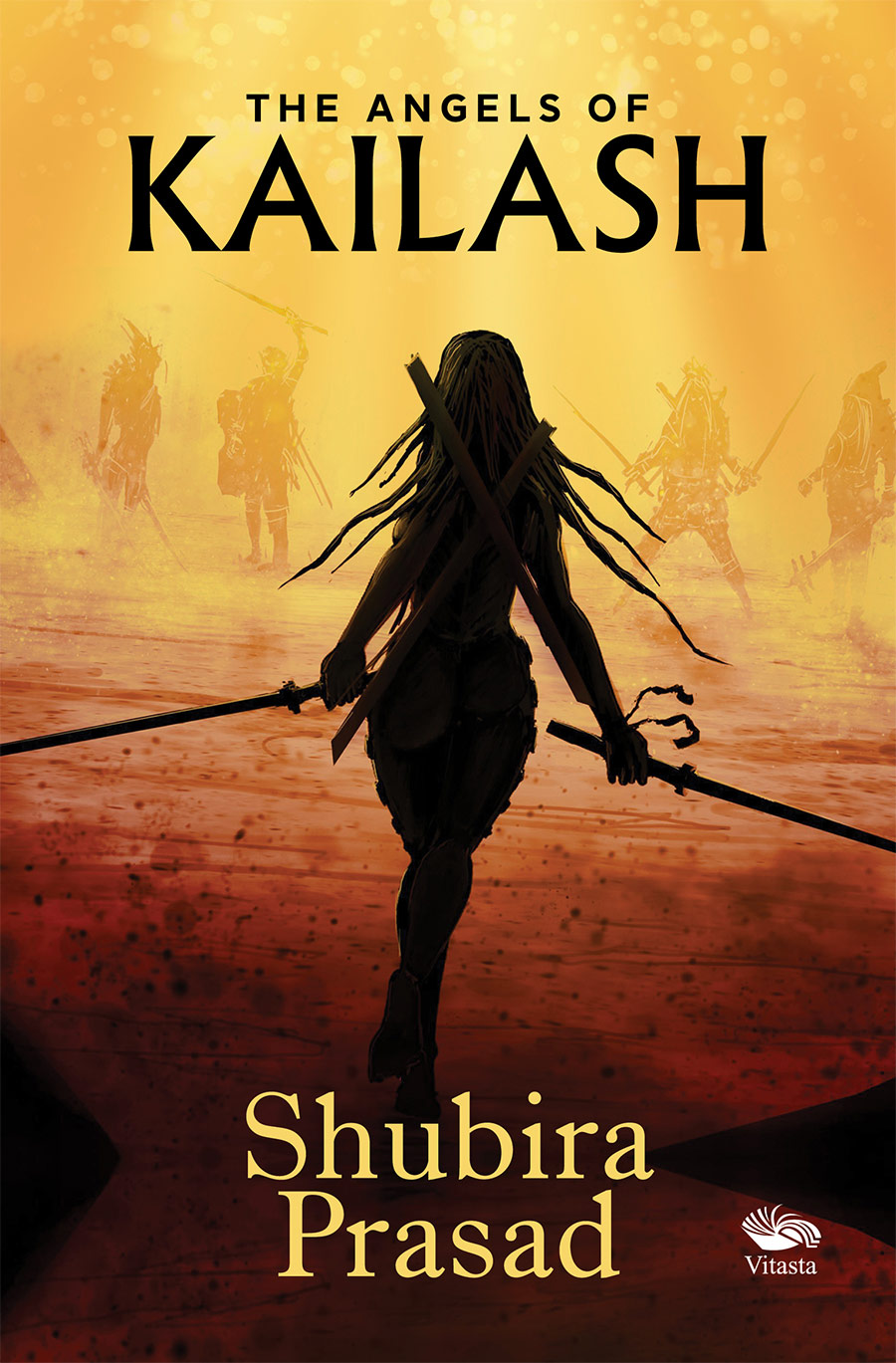 The Angels of Kailash – The 2ndpart of the trilogy is now out. Please share a sneak peek about the plot of this book.

Ans. Okay, but a sneak peek only. After their Gurukul and its inhabitants were annihilated, Adheesh and Aishani along with a few mutilated and undead people, escaped to the base of Mount Kailash two years in the past. They are toughened warriors. They can survive in the most diverse situations. But this was too devastating even for them. The Angels of Kailash is all about Aishani and Adheesh and their team of warriors and how they continue to fulfill their destiny and destroy the demons.

In-depth research is a must for writing such mythological plots….. mam how you did the research, and who helped you in this?

Ans. When I began my book, in depth research was one thing I was not fully prepared for. Initially I had thought that I would write only one book on demons vs human beings. But as I went on, I realized I had landed on a hornet’s nest. One demon led to the other, one warrior to the other, one divine weapon to the other, the list became endless. I could not stop. All of it was too interesting and I had to continue. My helpers were my books, Durga Saptshati, Ramayan, Mahabharat, books from Geeta press. Though I did read many books on supernatural in other cultures, my focus remained Hindu mythology

Who are your target readers?

Ans. My books are for anybody and everybody who likes mythology in India and in other countries too. It is for this reason that my first book of the trilogy ‘The Demons of Jaitraya,’ has now been published in the U.S. by an American publisher too.

What is the next project in your pipeline other than The Kumbh Conspiracy- the third part of the trilogy?

Ans. Quite a number of my readers want me to continue writing about the war between demons and humans. I am not averse to the idea; in fact it is quite appealing to me too. But for the time being I will give it a break. My next will be a compilation of short stories.

Shubira Ji, what are your other passions in life?

Ans. Travelling for one. I have travelled all over the country and more than half of the world. Covid has crushed my dreams of travelling for the time being, but I am raring to go as soon as I can. Reading, cooking, gardening, embroidery, knitting, stone painting are my other passions. Can one really fulfill all these passions in one lifetime?

Who remained your inspiration in the literary world?

Ans. In my case it has been the Ramayan and the Durga Saptshati and the Gita. I can never have enough of their interpretations. Apart from these great epics, I like to read space fiction, science fiction and the supernatural. Since the writers of these genres are too many, I cannot play favorites, but I can say that the writers of these genres have greatly influenced and inspired me.

Any suggestions for the budding authors?

Ans. Discipline, hard work and no procrastination. If somehow, you do slip now and then, make up for it in the next session. Write. Even a small number of words per day will help you in going ahead. Keep your imagination fertile.

Define Shubira Prasad, the author, in One line?

Ans. I am a dreamer, who is grounded in reality.