Author Rajesh Talwar, a name that reminds us about some of the best literary non-fiction works on important issues on topics like social justice, culture, and law. Well, beyond that, author Rajesh penned many children’s books, plays, self-help books, and many others counting to 29 books so far. He is back again with his new book titled Star-Crossed Lovers in the Blue (July 2021). This time the book is different as it depicts the love story of two long-lost lovers. 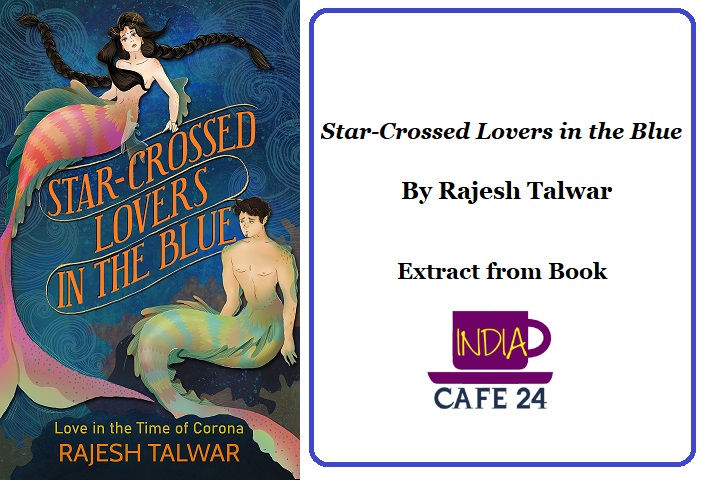 Here we present an extract of the book….. Grab your copies soon.

Extract of Star-Crossed Lovers in the Blue :

Arj was heartbroken. His thoughts circled in his brain and he grew confused. In his weaker moments, he imagined Utir to be a gold-digging mermaid, but then immediately his mind’s gears would shift, and he’d be inclined to a completely contrary viewpoint, one that portrayed Utir as a victim who consented to the match under tremendous family pressure. He knew they would certainly have desired her to marry someone as eligible as Adad, heir to the Dooda fortune.

He had been so confident that Utir loved him just as he loved her, but he saw now that he had been wrong. He had thought that they understood each other’s minds and thoughts, but he had been under an illusion. She had simply been toying with him. She had cheated and deceived him. This is what one part of his brain said to him.

Utir knew how he felt about her, he told himself. She had listened so patiently and lovingly to all the poems that he had written about her. Even if she hadn’t loved him in return – though till her marriage he could have sworn that she did– shouldn’t she at least have come back from the wedding and explained her decision to him? And she had kissed him before she left. Surely that must count for something. In Runway, even today, it means something when a mermaid kisses a merman on the lips. It was not a friendly peck on the cheek that a sister might give to her brother or a parent to their offspring. Surely, it had been more than that.

Deep down in his heart of hearts, he trusted her. He knew that she was not really a gold-digging mermaid and that she possessed higher values. This was part of the reason that he loved her so much. But then why, oh why, had she suddenly married that rich two-headed merman? Was there a way to find out?

He had been to her parent’s house, hoping to catch a glimpse of her, when he had not known that his beloved had gone away. A haughty Mrs. Yogi, inordinately proud of her new status as one who had married her two children into the Dooda family, had told him in no uncertain terms to get lost.

‘Excuse me, young merman,’ she said when he started to ask about Utir, ‘you know, I’m very very busy. I have no time to answer any of your questions. Come after a month, or maybe six months.’

Perhaps Mrs. Yogi was at the bottom of the whole affair, he thought. That must be it, he felt suddenly certain. But if the family was implicated and had somehow forced his Utir to get married, surely, they would not disclose this to anyone for fear of it reaching the ears of the Dooda family. He could have asked Yaja, but he too had gone away now that he was married.

No, the only one who could tell him what had happened was Utir herself. So he must find Utir, and persuade her that she had made a mistake. He paused for a moment in his thoughts. He would need to at least present himself as someone who earned a decent living. He must find Utir, but before that, he must find himself a job.

Love and trust have a strange relationship. If you love someone, it means that you put your trust in them, and you give them the power to hurt you by betraying that trust.

Arj loved Utir and he had trusted her. His love was so strong that his trust in her not to have betrayed him held firm, for trust and love support each other. Those who put on a worldly-wise air and insisted that Utir had made a calculated decision to marry into the Dooda family, and had never loved him, were wrong.

Previous: Cupid Is An Accountant By Shreyas Joshi – A Short Breezy Romance With A Twist
Next: A Book Review Of Vedas And Upnishads: Greatest Spiritual Wisdom For Tough Times Authored By Pranay