Indiacafe24.com > Astrology > The Implication Of Bells In Hindu Temples

The Implication Of Bells In Hindu Temples

The Implication of Bells in Hindu Temples

In Hindu Religion & Indian Culture, bells we can witness at the temple dome, which is located right in front of the temple Garbhagriha. There is a prevailing myth that our mind can only get enlightened with a shock. We all have noticed the existence of bells in Hindu temples. Many believed that the sound of these bells opens up our mind and fills it up with a sense of divinity. 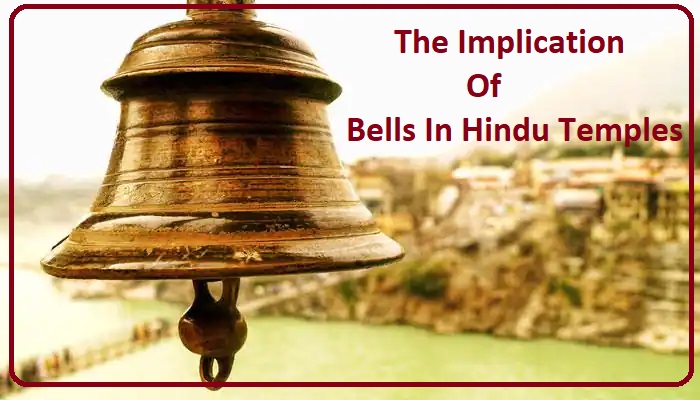 Bell is a musical instrument that is called “Ghantee” as per Sanskrit. In general, such bells are crafted out of varied materials. The common among them includes brass, copper, cadmium, etc. All these materials are used in equal proportion to make these bells.

Do you know a temple is the spiritual seat of the Gods and Goddess?

About The Design Of The Bell:

The design of a bell is quite interesting. It has a hollow interior where a tang remains hung inside the bell. Everyone needs to strike the tang against the inner wall to produce the sound. Another interesting feature of these bells is that different types of bells produce different sounds. The variation in sound in bells depends on the shape, size, proportion, and types of materials used to prepare the bells.

It is common to notice that bells are found hanged at the entrance of the temple. Well, these bells are hanged from the dome in every Hindu temple. We can divide the bells into the following categories.

As per Hindu culture, we believe that striking bells is to seek permission from God to enter into the temple, but it is a myth.

Bells or Ghanta are integral part of Hindu temple and connects us with god in a divine way.

Previous: 5 Books On Yoga – You Must Read
Next: Meet Play Writer – Rajesh Talwar