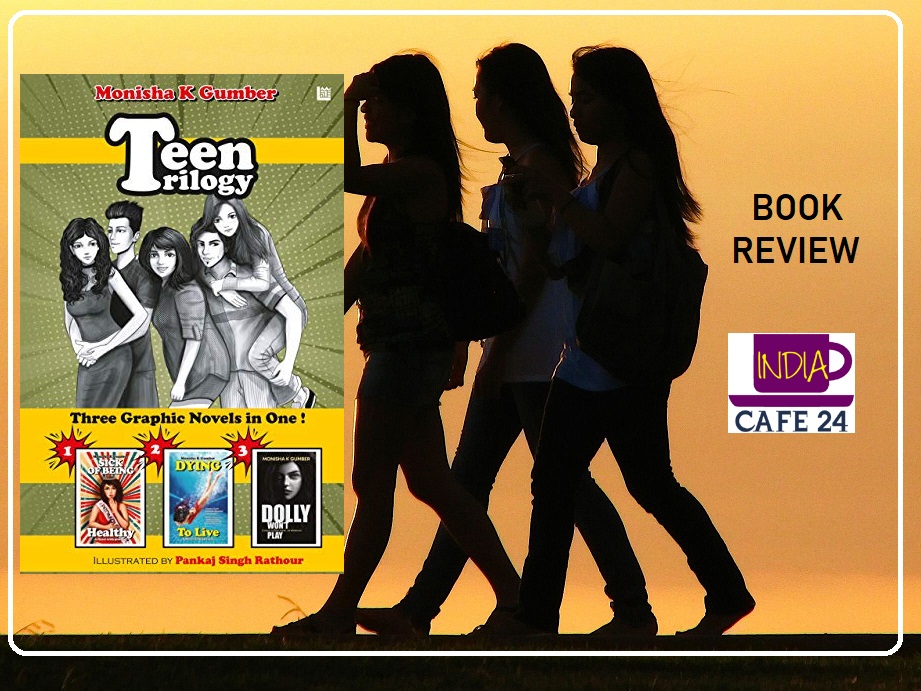 Simplicity is a word that I always prefer to have in my life. Being simple in no way makes you backdated or less knowledgeable for society. I again tasted the essence of simplicity when I picked the book Teen Trilogy: Three Graphic Novels in One by one, by Monisha K Gumber. Initially, the look of the cover page gave me the view it will be like any other teen love stories….. but no, I was wrong and am happy that I was wrong and still pick the book out of curiosity. As the name suggests, it’s a Trilogy …. Trilogy of 3 friends

1. Sick of Being Healthy:

The plot is simple, and something common to see in any middle-class desi family of India. It’s the story of 3 friends Tara, Megha and Dolly. Oops, there is one more key character Karan, who Tara calls her love. Tara is the protagonist of the story and the narrator. The story starts with the sisterly fight between Tara and her elder sister on the way back home with family watching the movie 3 Idiots. Even today in Indian society, parents take charge and decide what will be the career choice for their children. Well, that is something sad. If you try to share your opinion and choice about career, either you named kiddish or impractical. The same happened with Tara, who initially dreamt of becoming an actress without knowing the ABCD of the acting world. Her dream got thrashed down by her dad, didi, ma, and last but not least, his father being a conservative parent. In between, there were several changes in her decision in regards to choosing her career. I witnessed how teenagers consider infatuations as their love. You will be shocked to witness how Tara stepped into the shoe of another personality, which she is not. She did this just to get the attention of the guy she considers as her BF. Karan got attracted to Dolly. Well, that what instigated Tara to go that extra mile to create a new FB profile. The bio was fancy to grab attention without letting anyone know. Her fake ID turned popular, and she was happy with her achievement of making the 4311th friend.

When Tara got fooled by his internet crush, it was her mother who gave her the shoulder. She helped her to realize the reality of life. The mother-daughter bond gets beautifully penned by the author. The story revealed how the separation of parents affects the life of a child. HhoHowexpected achievements in life made us feel that we are no less than others. Will Tara get Karan, or its something different for her. To know, you need to read the story.

The protagonist of this story is Tara’s friend Megha. Why despite being successful in various fields she chooses to end her life? Tara’s release of the book made it compulsory for Megha to write one as her mother forced her to think like that. The narrator and protagonist of the story both are Megha. Too much winning in life finally made her tired but still no relaxation because her mother never allowed her to do so. A failed teenage relationship followed by the devastating news of her parent’s divorce broke her completely. Things started falling in life one after another, and the depression led to a panic attack and the desire to end life. But how Nani’s lessons changed her life forms the rest part of the story.

In the first two stories of the trilogy, I got an idea of what can be the best example of beauty with dumbness, and that’s Dolly. The third part of the trilogy is on the story of Dolly, and the first few pages thrashed my earlier view of Dolly and came to know, she got abused sexually when she was a kid. It was none other than a person whom she called uncle and her mother’s friend. Behind the dumbness was a sweet and affectionate girl who can go to that limit just to keep her mom happy and hidden the abuse she faced in childhood. Disturbed parent’s life affected the child so much that even her father refused to call her daughter because of dumbness. Childhood abuse was serious for her. Well, she started believing that her dumbness is God’s decision to punish her for her deed with her uncle. Her father’s rude behavior towards her poked her to return to that uncle to get dirty again because at least he loves her.

Love knocked on her door, and she didn’t mind ditching her best friend, Tara. Tara liked Karan, and she knew it, but there was some X factor that dragged her towards Karan? What’s that? It will reveal when you read the story. What I can say about this story is that we should not make an idea about it. We must know what one is going through before making comments.

I am full-on impressed with the way the author penned down this trilogy. Seriously teenagers need to go with so many ups and down which many of us can’t think. Author Monisha beautifully presented the stories, which gave us true pictures of teen lives. It displayed how their desire gets overlooked by parents and how family malfunctioning creates a serious impact.

Author Monisha trust me, I am in love with your storytelling skill. All the best for your future books and yes, also for this too.

Previous: Long-Short Stories- A Beautiful Collection of Short Stories By Chetan Soni
Next: Father’s Day – Honoring The Silent Love Of Fathers For Their Kids