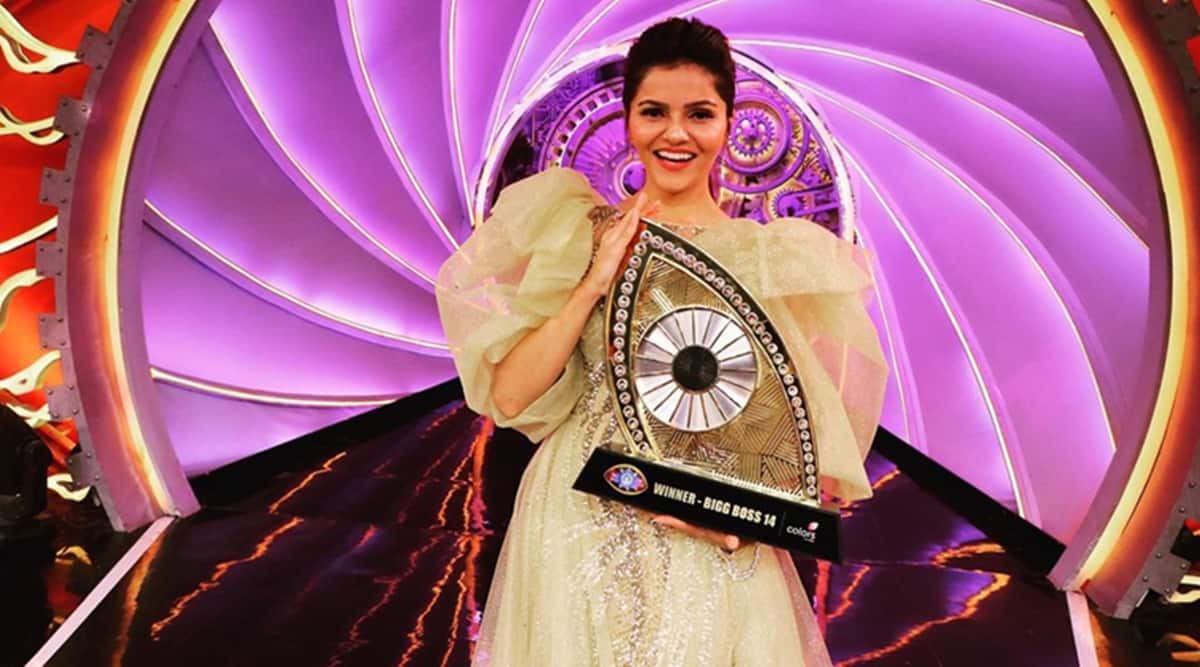 With remarkable star-studded performance, Big Boss 14 flagged off on 21st Feb 2021, announcing Rubina Dilaik as the winner of this season. Rahul Vaidya ended with the second runner-up position. The other three finalists among the top five were Nikki Tamboli, Rakhi Sawant, and Aly Goni.

During the Covid pandemic, Big Boss 14 flagged on with mass fanfare in October 2020. The show began and created a sense of relief for the audiences who thought to enjoy something funfilled and drama on television during the lockdown. It was 140 days journey that ended with glamorous performances of Nora Fatehi, Salman Khan, and five other finalists.

It was 9 pm sharp when the finale began, and Salman Khan introduced five finalists to Madhuri Dixit. Rakhi Swant showed her graceful performance on two beautiful songs, Pardeshia and Julie.

It was great to see Ritesh Deshmukh back once again on stage. He gave an attractive 14 lac offer to the finalists to walk out from the show. Rakhi Sawant pressed the buzzer and proved lucky to grab Rs 14 lac without being the winner. All finalists regretted their past doings. Nikki Tamboli thanked her admirers for supporting her so much during the journey. Next, very talented actress Nora Fathehi set the stage on fire with her performances. She interacted with the finalists and also performed a duo on Garmi song with Salman Khan. Sonali Phogat made audiences stunned with her sizzling performance on Tip Tip Barsha Pani. The audience will also remember the cheerful presentation of Eijaz Khan and Dharmesh Yelande on Hrithik’s song, Ghungroo Tut Gaye.

Veteran Actor Dharmendra praised the entire Big Boss team and interacted with the finalists. The Big Boss 14 Grand Finale was the platform for inaugurating another popular show Dance Diwane. Salman Khan promoted the dance show. In the end, Salman Khan announced Rubina Dailak as the winner of the Big Boss 14.

For many, it was well predicted that Rubina will be the winner and that happened. But was that justified or is she truly the deserving candidate to win? Is it just because of her Shakti Teleserial craze and fan following that turned her the winner? Maybe yes or maybe not. But on the personal front, the result is not acceptable keeping in mind the level of misbehavior, unwanted drama, irritating domination on housemates, and last but not the least husband-wife melodrama I as an audience witness from the Rubina-Abhinav duo. Honestly none deserve to be the winner in my eye as each one of them crossed the bar of mannerism. Still, I consider among 5 finalists Aly Goni and Rahul Vaidya are far better choices than Rubina. But now as she is declared as winner… what else can we say …. Congratulations, Rubina. Rubina took home the sizzling trophy and 36 lac as award money.

What’s your take on the topic… is she the deserving winner in your why…. Share your view.

Previous: It ends with a dream – A story with all shades of emotion, turning it into a perfect family drama with the shades of un-achieved love
Next: Forty-Nine Shades Confused By Deepak Kaul- A Desi version of Fifty Shades of Grey

The Popular Genres Of ...
Was She Mine By Bajrang Sultan...
Santoor Maestro- Pandit Shiv K...
The Boy Who Wrote a Constituti...
Five Short Stories by Rabindra...
The Loved Detectives from Beng...
Author Luke Gracias Now In Ind...
Celebrating The Auspicious Day...
Book Review: The Symphony of ...
Beyond The Darkness By Yuktha ...